Approximately 7.3 million tons of food was wasted in the UK in 2015, which equates to £13 billion in monetary terms.

This isn’t new, we’ve been throwing away food for years, but most consumers have been unaware of the amount of food that they have wasted.

Until now ….. in July 2016 an official House of Commons food waste enquiry was launched and this has estimated that the average UK household lost £470 a year because of avoidable food waste.

The household is where the highest percentage of food waste takes place. Households in economically developed countries are responsible for about 38% to 47% of their country’s food waste. According to research from WRAP, a UK-based Waste & Resources Action Program there are 10 main reasons for food waste at home. 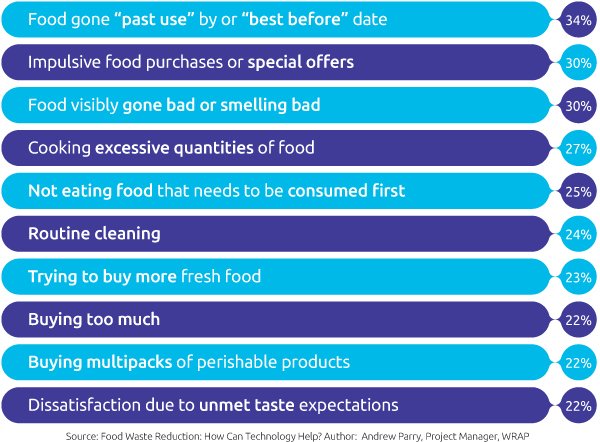 As a result, the big food producers like Heinz and Bird’s Eye have reacted by developing packaging that allows food to be kept fresh for longer.

And the major supermarket retailers are all updating their shelf-life guidelines and storage information, as well as relaxing their quality standards so that ‘wonky vegetables’ are allowed in their stores,

The message out there is not only is this food waste causing huge environment problems with the account of landfill its using, it’s also hitting consumers where it hurts; in the pocket.

And this in turn is creating a culture change in how we respond to food waste which has impacted on our grocery shopping habits.  The 2017 Waitrose Food and Drink Report says that consumers now treat supermarkets like walk-in fridges with two-thirds of Britons nipping to a supermarket more than once a day, and one in 10 people decide what to buy for an evening meal just before they eat it – often stopping to shop for it on the way home from work.

Longer opening hours and more convenience stores combined with a drive among shoppers to waste less and stop themselves “over-buying” has led to a new trend that Waitrose is calling “as and when shopping”.