In this interview with the kitchen industry’s best kept secret, Jayne Barber, we draw on Jayne’s 30 years of experience researching the UK kitchen market to find out about the trends that are having the biggest impact on sales of kitchens.

Jayne Barber established JKMR in 1998, as the UK’s only business-to-business research company specialising in the fitted kitchen product industries, supplying a range of multi-client reports and consultancy services to meet the day-to-day needs of those supplying the market.  JKMR clients include major names in all sectors of the UK and European fitted kitchen markets, as well as global names in the financial investment and business analysis.

TM – What trends are having the biggest impact on sales of kitchens in the UK at the moment?

JB – One main trend is the way we are changing our cooking habits; often that’s not the way that people are really cooking – it’s how, in an ideal world, they’d like to view themselves as cooking.

There’s still a lot of influence from television programmes like Bake Off where everybody has a dream belief that they’ll make 300 cupcakes, so want appliances that will enable them to do that.

There’s still a lot of influence from television programmes like 'Bake Off' where everybody has a dream belief that they’ll make 300 cupcakes, so want appliances that will enable them to do that – Jayne Barber, JKMR #kitchentrends Click To Tweet

More fundamentally, however, there is the influence of how people live and families function.

Families no longer socialise in the same way. They have their own bedrooms or use different parts of the house, and no longer sit in their lounges together. Yet there’s still this great desire to have one room that encapsulates the idea of a family, or a group of people living as a family.

Another factor is the presence of more and more tri-generational families, who often eat different meals because of different dietary requirements, but they still like the idea of congregating and eating together at times.

These trends are driving the inclusion of islands, multiple appliances, and more storage space, as well as the combining of what was once a lounge area within the kitchen space.

A kitchen also needs to be practical and relevant to all members of the family. People have more appliances to cope with different dietary needs. If you’ve got a vegetarian, a flexitarian, a vegan, and a gluten-free in one household, for instance, you might need to stock different types of margarine so need more refrigeration space or refrigeration that lends itself to being used more efficiently with flexible shelving.And the same for needing multiple ovens.

Unfortunately due to the nature of British homes, the vast majority of kitchens are quite small so most people do not actually have room for a bank of three or four ovens other than at the top end of the housing market.  This is why, for the mass market, there will increasingly be a demand for more flexible ovens and other appliances.

TM – How do you think key players in the kitchen industry are responding to these trends?

JB – I think the industry is much more responsive now to understanding that you have to give the consumer the kitchen they want – there isn’t a one-size-fits-all solution.

The kitchen industry is much more responsive now to understanding that you have to give the consumer the kitchen they want – there isn't a one-size-fits-all solution – Jayne Barber, JKMR #kitchentrends Click To Tweet

People do want something that’s personalised to them and there’s now a sense that the market is being driven by listening to consumer needs rather than consumers being told ‘this is what we offer’.

I think what will happen in the retail base over the next 10 years is that there will be a diverging into three types of retailer. One will be the trade retailer like Howdens, where there is no real communication with the ultimate end user.

At the other end there will be the studio specialist sector, who invest time in speaking to their consumer, and who work as a design professional.

Then in the middle I think you will have the mass volume provider who can supply a limited amount of design expertise, or provide a fuller or a more personalised service if you are willing to pay extra, but whose bread and butter will be mass volume retail.

I think, too, in that mass volume sector there will be an increase in online retail with an assumption that people will do the measuring themselves and it will be a ‘like-for-like’ replacement in terms of layout.

TM – Do you think people’s attitudes to cooking are changing?

JB – I think a lot of people under the age of 40 lack basic cooking skills due to changes in how cooking is taught in schools, focusing as much on nutrition as practical skills so that it has almost become shunted towards being a science.

At the same time there’s been an explosion in cooking as entertainment, so when people do cook, they want to show they can cook something amazing. The need for appliances that enable people to replicate what they’ve had in restaurants or seen on television has increased hugely and will continue to do so.

There is also beginning to be a genuine interest in wanting to feel confident enough to experiment with food, and part of that is also feeling comfortable in your kitchen because it works well for you and you like looking at it – after all if you don’t like the look of your kitchen, or something about it annoys you, then you’re not going to want to spend a lot of time in there.

There are also more people who don’t bother to cook at all, with a huge rise in the use of the Just Eats and Deliveroo – that ability to call up restaurant food and have it at home. This could impact kitchen design, as you don’t actually need that much storage space, or fridge and freezer space, if you’re not having to store ingredients or cook.

TM – Are there any social trends developing now that will impact kitchen design in the future?

JB –A key social trend is that there will be more people renting, and a move within construction towards ‘build-to-rent’.This in itself could eventually lead to a shift away from properties with large kitchens.

A key social trend is that there will be more people renting, and a move within construction towards 'build-to-rent'.This in itself could eventually lead to a shift away from properties with large kitchens – Jayne Barber, JKMR… Click To Tweet

If things go on as they are, there will be a huge increase in the volume of built-to-rent properties owned by large residential landlords. And then the demand for a kitchen will be different, because you could be looking at a property that over the course of its kitchen life –say 10 years – may be used by three different types of people. It may be used for three years by a couple, then it might become a family kitchen, and then it might be used by an older person. So kitchens are going to have to be designed to be more flexible.

Obviously, too, if people are renting something they don’t necessarily take as much care of it – they don’t have a vested interest in it as it’s not theirs. This will be one of the drivers in the diversification in the retail base as it is likely to be the the rental sector buying mass volumes of kitchens from the trade.

The landlords’ priority is to make as much money as they can – they’re not an individual investing in their dream home. Also, if the build-to-rent system moves towards something similar to student housing, then each property’s kitchen may just be a small area because people are assumed to primarily use a communal space.

TM – What about design trends?

JB -I think design trends are very difficult to quantify – there are about 300 shades of grey doors in the kitchen market but if asked in research to most people it’s just grey.

I don’t think there’s been a huge amount of change in kitchen design as such – it’s more tinkering with relative shades of grey and cream, handle vs handleless kitchens, more metal trims, etc., but in recent years it has been fundamentally the same type of kitchen.

Structurally, kitchens now have a much longer lifespan than they did two or three decades ago so the market needs to do something that will force people to change their kitchens every 10 years rather than potentially have them for 20 or 30 years until they finally fall apart.

The market is likely to stagnate until the wider socio-economic situation settles down, but within the next decade or so I do think the market is going to have to do something to artificially trigger a new ‘boom’.

In the past, a boom been created by a new must-have appliance – in the 1980s it was the dishwasher, which led to people thinking ‘I need to have a new dishwasher so I’m going to have to redesign the kitchen as I haven’t got a space for one’.Before that there was the creation of the fitted kitchen itself in the 1960s – moving away from freestanding units and cooker and fridge to the idea of fitted cabinetry.

Yet who knows what the new trigger will be? Maybe it will be the invention of some new form of appliance that will reduce food waste, or utilise grey water systems, or that can be driven off much lower electricity.

Or perhaps there will be a push towards the idea of a living worktop hydroponics system, or technological advances like 3D printing food.  I imagine one thing might be that there’ll be a push towards the integration of AI within the kitchen – not merely smart appliances in terms of your oven being able to talk to your phone and your fridge being able to tell you what’s in it, but something much more fundamentally different.

Maybe someone will invent a system that can home recycle plastic and connect to 3D printers, so you can create your children’s toys out of your waste food wrappings – who knows?

Maybe someone will invent a system that can home recycle plastic and connect to 3D printers, so you can create your children’s toys out of your waste food wrappings – who knows?- Jayne Barber, JKMR#kitchentrends Click To Tweet 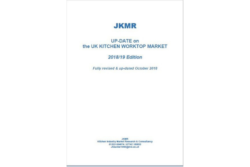 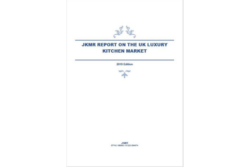 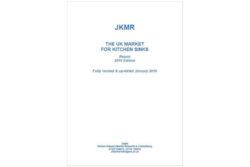 The Structure of Families and Households in the UK

You are now one step ahead of the competition!